In the Friesian world many know me as Leny.

Leny Hayteme-Reidsma is my full name and together with my family live in Wons a place nearby IJsselmeer and a village named Makkum. 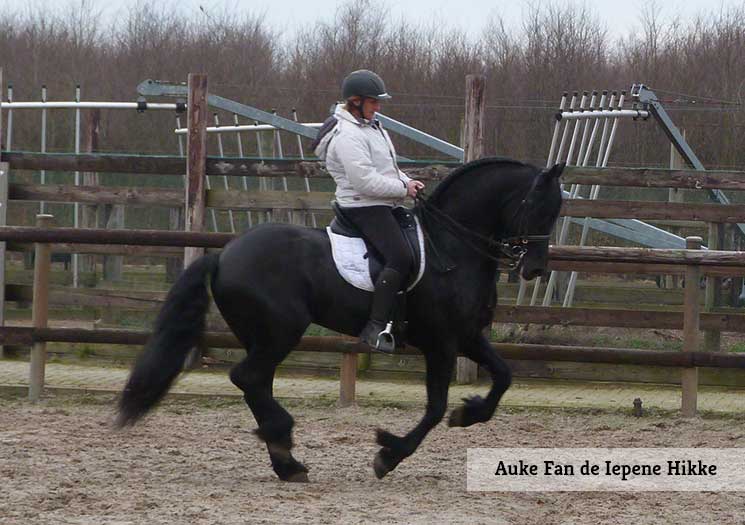 From a very young age i started to pony-ride together with my friend, she was also my neighbour, we cycled everywhere just to be around ponies! At the age of 7 years old together with my father we arrived at the Gaastra's Tjerkwerd which was a farm who owned Friesian horses. I was allowed to care for these horses. I worked with Friesian horses, from breaking horses in and to getting them ready for the inspections to be graded. In 1999 we bought our first Friesian mare, Ymkje van Dedgum. She became 1ste premie star and earn her sportpredicate in the dressage. We bred 6 stallions out of her. Our mare Annegje v Meslans, stam 28, we bought this mare back in 2006, she is also the dam of Ymkje van Dedgum. From this mare we bred our own starmare out of Fabe named Geartsje fan de Iepene Hikke and star mare out of Aan named Nyncke fan de Iepene Hikke, Ster-gelding Foppe fan de Iepene Hikke at the age of 3 was awarded champion at the Euro Friesian Cup and now Z1 dressage and earn the sportpredicate, like his brother Auke fan de iepene hikke. Annegje so far has produced 5 ster offspring and 3 sport offspring, we are very proud that she became Preferent and Prestige. Annegje passed away in 2013. She became 21 years. Estelle van de Strubbenhof is our other mare, she came in 2011 at our barn. Estelle is a Doeke x Tsjimme and is the full sister to the dam of the approved stallion Brend, stam-line 34. Out of her we bred Mary fan de Iepene Hikke out of the stallion Aan, she was awarded a 1st premie and Star..Than Trudy fan de iepene hike, Star. Willem E fan de iepene hikke Star.Young ones who are going in the coming years to the keuring, Arie, Elza and Hilda. Estelle became in june 2018 preferent, Estelle passed away in November 2018 I love to work with the horses, I have horses of my own at my barn, but also horses for Clients. They bring also Friesians at my barn for sale, but also for have them foal at my place. I love to ride and driven

The horses in the pictures you can see on this page, are our own breedings.